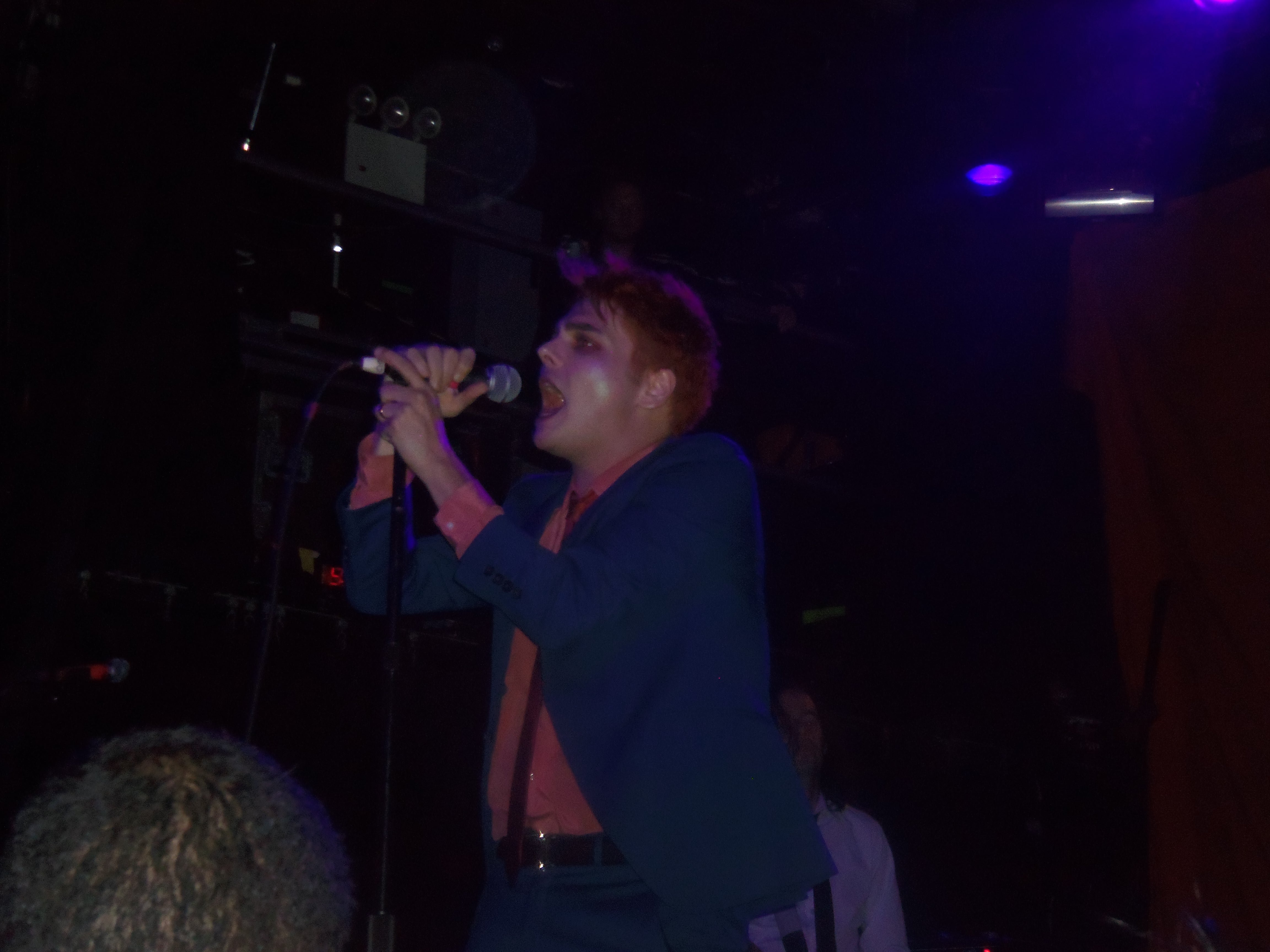 Gerard Way is now on his first solo tour (complimented by the/his band The Hormones). He is playing medium sized venues compared to the stadiums he and his former band My Chemical Romance once sold out.

He has also been my role model, hero, and favorite musician since I was about 12 years old.

I firmly believe that there are a select bunch of people on this earth that you share a kinetic, same wavelength kind of vibe with. Gerard Way is one of those people for me, and probably at the top of that list. I’ve seen him in My Chemical Romance over half a dozen times. But nothing, nothing could have prepared me for seeing him at Irving Plaza on October 20, 2014.

I was going to this concert alone and decided to head into the city at around 9 in the morning. I got to the venue at around 10:30 a.m., due to my poor navigational skills. There were about 15 people in front of me already, and it was pretty cold. I first made friends with the girl and her father in front of me. They had trekked all the way from Quebec for this show, and it was her first time seeing Gerard Way (she had never seen MCR in concert before).

I made fast friends also with the high school aged girls behind me. We each took turns to get food and bathroom breaks throughout the day. I was lucky to have met such great people who ‘save your place.’ I brought a deck of cards and we played a couple rounds of Memory. Most of us on the line were dressed in black and we were targeted for the peculiar event of a lady walking by us showing us her phone- which had a picture of Jesus on the crucifix. It was strange.

About two hours before we would be let into the venue security split the lines between regular pass holders and fast pass. I had the fast pass. I was bumped up in the line and made some new friends while waiting. No tux, no bev guys!

Then doors opened, bags searched, and a flood of footsteps up the flight of stairs to the show room. I landed a barricade spot, off to the right. It was another hour of waiting, joking with the people around me, singing to the songs playing over the loud speaker -many of them popular when I was a middle schooler.

The opening band, The Eeries, played for about a half hour. They were good, passionate musicians. Their songs were a bit predictable in structure -wherein I caught onto the lyrics in the middle of the song and I was able to sing along. A half hour turnover of the stage and at nine Gerard Way took the stage.

Way played the whole album and three additional songs (one being an encore). He is a spectacular musician because he doesn’t just perform with his voice, he performs with his soul. It stems out to his fingertips and toes. He convulses with his music. And when he steps on to the edge of the stage, extends his shaking fingers out to you, you can swear in the brief moment your eyes lock you’re psychically linked. His eyes are psychotically electrifying. Way has a wild look. He believes in you so very, very much and he needs you to scream and sing as loud and with as much heart as you can.

I am the most alive in that moment.

There are also times when he looks away from the crowd for a second, microphone still hanging in his grasp, and he breaks out into a smile. It’s one of those beaming smiling you can’t control, it manifested itself wide and natural on his face. And in the next second he is back to his stage persona, belting out lyrics, that smiled wiped off his face a long time ago.

Way kept in his enlightened socially progressive between song banter. He talked about being a feminist, transgender rights, and just being in control of yourself and doing what you want. He is too good to me.

After the concert we briefly waited to see if he would come out and visit us at the barricade in the venue. After it became apparent this night he wouldn’t be making that stop, I exited the venue and got on line to wait for him to come out the stage door. I chatted briefly with James Dewees who is such a chill guy. The line got moved to one side and I dashed over to take my chance at a spot. At around 11:45 p.m. he came out and started signing. We weren’t allowed to take pictures due to time, just one autograph and an elevator speech. He also gave us hugs.

I got the opportunity to tell him what his presence in my life for the past 10 years has meant to me. I told him I couldn’t be me without him. He responded by saying ‘Thanks, I like to hear things like that!’ He looked so tired but generally happy to be meeting with us. Despite his grand stage persona he seemed pretty shy. He will forever have my respect for just standing out there for a long time meeting with us. How many artists can you say actually do that?

I walked down the street to the corner in a daze. I hailed a taxi, gave him my destination, and broke into tears.

Gerard Way is my hero. I want to do things in my life that would make him proud because he makes me happy to be alive.

This was an unbelievable night. Thank you. A million times.