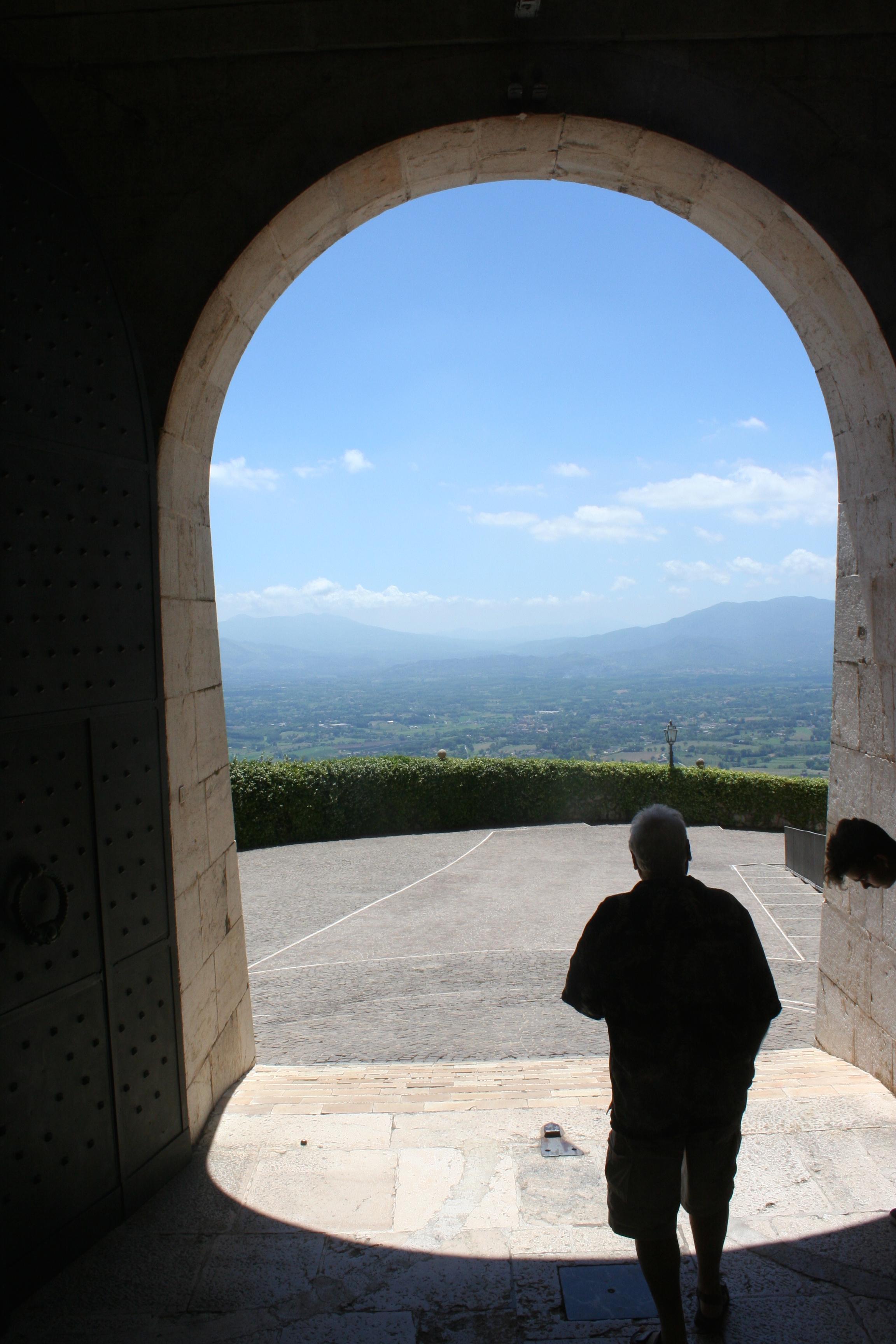 It is often mentioned that goodbyes are permanent, which is why I chose to entitle what is to be the last installment of me blogging about my Italian travels with the phrase ‘see you later.’

When I first arrived in Italy, the stalks of corn were just below my knees, now my head is tilted back just to see the tops.

When I first arrived in Italy it was an American holiday, Memorial Day, and I return on the eve of another, Independence Day.

I have been shown a piece of Italy that is often looked over in the travel books and in the account of passerby’s. The house that my father grew up in still stands, but only as a shell of the home it used to be. The island where my mother’s family hailed from enchanted my mind.

What had started out as a semi-spontaenous trip to Italy, with plans to explore the alternative life of organic farming under WWOOF, took a turn, and instead I learned what it is like to live day-in and day-out in the suburbs of Italy. There’s hard work to be done but it was always rewarded with spending time with the people who matter in life, eating and drinking delicious foods, and trading stories and ideas into the late nights.

I did things that I do back at home, like bowling and billiards, but also did things I would have never done back in the States such as riding on a scooter and mixing my beer with Coke.

Moments of reflection each day were spent with a fresh cup of hot espresso in hand.

I saw a nation propelled with excitement for the World Cup, and witnessed their devastation with the failure to advance out of group. I made friends with people I could only hold small conversations with. I did and saw so many things that it causes my heart to ache just thinking that it will be a long time before I get to feel the same way again.

Today we visited the Abbey at Monte Cassino. It was a very fitting place to visit on my last day.The abbey has a long history, but in the more recent span of its life it is known for a large World War II battle that took place there.

It was a 20-mile drive which gave me plenty of time to stare out the window and think about the ‘last time.’ With every chapter marked by some big change, usually the end of a year or the time I moved back home from college, I think about the ‘last time,’ I do or see something special or unique. The things I was thinking about had me crying again. It’s the littlest things too, like going to the Conad supermarket or admiring the neatly placed bales of hay on a hillside…

The abbey sits atop a mountain, and the road there had plenty of hairpin turns and overlooking cliffs. But the ride was worth it with the view at top.

We got there a bit late, about a half hour before they close the abbey during the week so we didn’t see everything. What I did see was beautiful. The courtyards were mostly white stone accented with a green garden. There were a few doves perched on the rafters. After our mini-tour of the abbey we went to the nearby Polish cemetery. As mentioned before, there was a big WWII battle here, which you can read all about on the Wikipedia page.

And so, tomorrow I believe before dawn for the airport. Through the next couple of weeks I’ll be editing my blog posts about my trip and probably adding a few posts reminiscing about my time here.

We’re at the tail-end of my second week here, and this week has been very consistent. I’ve fallen into a light routine of wake-up, make breakfast for myself, study italian for a few hours, eat lunch, and then help with some of the chores. Today I was supposed to go for a walk with one of the neighbors but she never showed up. That’s fine with me, it’ll happen eventually. I was able to help my aunt in their little farm, I watered rows and rows of vegetables (vedura) and helped remove rocks from a planter. There were so many ants (formiche) in that planter I thought  I was going to be eaten alive by them.

I washed up a bit before dinner and lounged for an hour or so then helped with dinner preparation. We don’t eat until almost 8 or 9 o’clock every night which is much later than I’m used to. But I enjoy it all the same.

I help clean up after dinner and enjoy my twice, sometimes thrice daily espresso.

I never understood the delight (delizia) of espressos until drinking them here. It’s not even a thought to have one or not because you’re never in a state where it’s a bad time for one.

All aside I mentioned yesterday that my italian is starting to string along. I’m able to reciprocate in mini-conversations with my aunt which is great for us bonding. I spend a lot of time helping her so it’s nice to have a little chat.

The wonderful (meraviglioso) thing about learning a new language is it forces you to think differently. Creatively. I can’t form all the sentences in the way I would normally do I have to find some interesting ways to construct them. The best way to describe it is viewing the world as a child again. Of course, a child would have a better grasp of the language them me, but some of the phrases that have spewed from my mouth have resulted in pretty poetic pairings.

In addition to the child-like wonderment of learning a new language, I’ve been trying to force myself to think in italian. It isn’t going so bad but it does take up a lot of energy. I think that’s why I’m so tired at times.

I can expect tomorrow to be pretty much the same, but we shall see. No pictures today, unless you want another version of the sunset (tramonto) I take a picture of every night.

Yesterday (Friday 5/30) I was supposed to start my WWOOF. And you even got a sneak peak of my experience there with my last post, which is now completely irrelevant. And here’s the story (il racconto) of what happened soon after I wrote that and why I’m not at that farm anymore.

After my cousin left my host showed me my room and then we went to eat lunch. We chatted a bit about who we were and she ate quickly and then apologized. She’s an older lady and explained she needed to take a nap because she wasn’t feeling well and that she would be back in two hours. Before going to take a nap (fare a pisolino), she helped me set up my room and gave me the device to connect my laptop to the internet (which I was told only to use briefly).

I checked in with my family and told my mom how nervous I was to be here, because it felt strange. The lady was the only one at the farm. I had expected more people to be there and working, but there was absolutely no one. I couldn’t imagine this elderly lady doing all the work.

I explored the place a little bit, not straying too far in case she woke up early and needed me. I took  a few pictures, played with the cats, and sat down in the shade to attempt some creative writing.

Three hours pass by and I felt something really wrong was happening. My host woke up and the first thing she says to me is that she needs to go to the hospital and that I need to leave. So we call my cousin and make plans for him to pick me up at a train station in Rome. I felt so bad for this, but what was I to do? My host explains she has a heart condition and she asked me what I would do if she were to die. It was a bit surreal. She brought me to the train station in town, bought me a ticket, and explained when my train would come and when it would arrive in Rome and where I would meet back up with my cousin. Then she left for the hospital.

A little over two hours I was back in Rome and then we drove the hour back to their house. When I walked in the door, my family could tell I felt bad and they reassured me that I shouldn’t worry about it.

I ate dinner, showered, and checked in again with my family back at home to let them know I was safe and sound.

The host contacted us again to tell us that she was back from the hospital and if I wanted to I could spend a week there. But I’m not so sure, what if she gets sick again?

I woke up pretty late today, and felt bad for it, but sometimes a long sleep is all you ned to feel like yourself again. After my very late breakfast I helped out at my cousins farm with watering vegetables. I collected the eggs from the chickens after lunch, just in time because the clouds rolled in and the sound of tuono heralded a hail storm.

Oh, I forgot to mentioned what we did Thursday night, the night before we trekked to Viterbo and that fiasco. On Thursday night we visited the medieval town of Boville Ernica. We gazed at the overlook as it is one of the highest villages in the area. At first I thought I saw a shooting star, but it’s erratic flight pattern had me guess again. I pipistrelli, bats! Very cool. We walked around a little bit admiring the medieval walls and buildings before returning to Frosinone to drive around the downtown area and sit at a salsa bar and enjoy cocktails and music. I didn’t take any pictures of Boville Ernica because it’s a memory I wanted to preserve in my mind. Taking too many pictures ruins your visual memory, so I have to remember not to be such a shutterbug all the time.

I just arrived on the farm about an hour ago. It’s very beautiful here and the host has been so nice so far.

However, I’m actually really nervous. And excited. But my nerves are absolutely destroying me right now. I’ve never truly been this alone in the world and it’s causing me to wonder if I really want to be alone. I decided to WWOOF to find peace with myself and to find strength. But now that I’m here I think I’ve always had those and I’m wondering why I had to go out and prove it.

Either way, I’m here and I’m going to try and make the best of my time.

You won’t hear from me a lot because the WiFi here isn’t as I thought it’d be. I have to borrow a piece to connect and it works almost like a calling card. Maybe if I have free time I will go into town and get my own.

I don’t want you all to worry, I am somewhere safe and surrounded by beauty. I just wish I could understand why I’m so nervous over this.

See you in a bit.